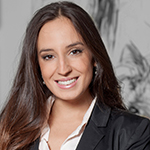 Education:
On 14 july 2010 she graduated with praise at the University “Roma Tre” in Rome, with degree thesis in “Family and civil liability:the problem of compensation of the damage from <endofamiliare> illicit”  (Graduate Supervisor: Prof. Salvatore Mazzamuto).
After two years carrying out (among other things) an internship of one year at the fifth section of the Rome Criminal Court, on may 2012 she graduated from the School of Specialization for the Legal Professions at the University “La Sapienza” in Rome, earning the 67/70 vote.
She attended the english language Institute “Southern States University of San Diego (U.S.A.)”, with  final vote: “Advanced”.
Registered in the Register of traineers at the Bar Association of Rome since october 2011, from september 2010 to october 2013 she served as legal practice and worked in “Studio Legale Persiani-Rizzo”.
Admitted to the Bar in Rome in november 2013, since this moment and until october 2016 she worked at the law firm “Bernardini de Pace”.

After this experience, in october 2016 she became one of the lawyer in “Studio Legale Persiani-Rizzo”.
Since january 2016 until january 2017 she was the Head of Legal Affairs of the “Italian Families and Mixed Pairs” - A.I.F.Co.M., and from 2014 is a collaborator of Avvocati Indipendenti S.r.l., company which telematically provides legal advice and assistance throughout Italy.