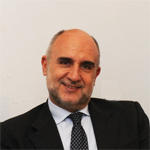 He graduated in law from Sapienza University of Rome on 6 December 1979.

Since 1990 he has been in partnership with Romolo Persiani.

He has ultra thirty years’ experience in the law of the family and minors. He also specialises in aviation law (he has acted, and acts, for aviation and airport companies), bankruptcy law (he has frequently been appointed as receiver and administrator, and appointed to appear in court in bankruptcy matters as either plaintiff or defendant), commercial, tenancy, condominium and succession law, enforcement procedures (he has acted, and acts, for banks and insurance companies).

In april 2011 Antonio Rizzo became Professional Mediator in accordance to Italian Law n. 28/2010, and he is a member of the Forensic Mediation Association set-up by Rome Bar.

From 2002 until march 2016 he has been Legal Department’s Head of the “Centro Famiglie di Villa Lais” in Rome.

He is a founding member, and was President, of the Association of Lawyers for Europe.

He is a founding member, and Coordinator, of Avvocati Indipendenti S.r.l., company which provides legal advice and assistance telematically throughout Italy.

He has spoken at numerous conferences and, in the area of professional development held by the Association of Lawyers for Europe, has organised and chaired conferences and seminars on a range of topics.

He held legal lessons (also at the LUMSA University of Rome).